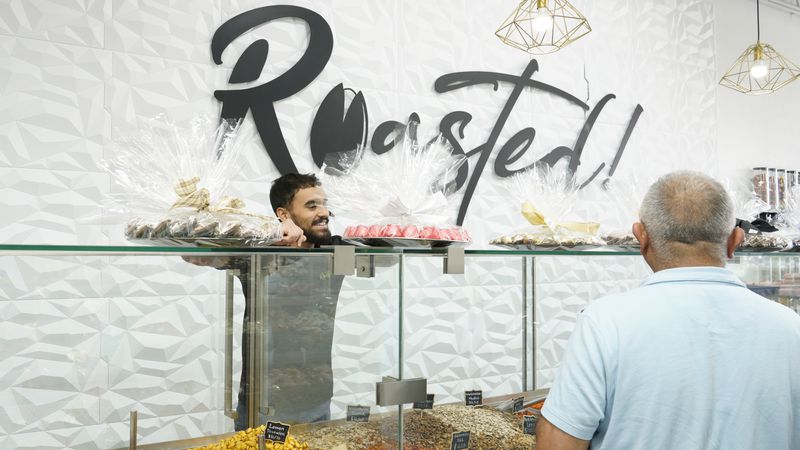 Near Tampa, a dream come true in nuts, baklava, chocolate and Turkish coffee

TEMPLE TERRACE – The question – asked during a lull of customers filling bags of fancy chocolates, asking for a thick, steaming Turkish coffee taste, and choosing from an assortment of baklava – didn’t seem to insult Loai Kader.

In fact, it made him smile.

His fledgling store, called Roasted! and tucked away in a mall near a Mexican restaurant and health food market, sells Middle Eastern flavors in the form of candy, candy, nuts, seeds, and spices. Inside, the store is surprisingly bright, sleek, and modern, something that might pop up in a big city instead of a sleepy suburb of Tampa.

So here’s the survey: Is this place a franchise?

Because it was a roll of the dice, opened in December in the coronavirus crisis even as stores as well-known as Godiva were closing across the country.

Kader paid particular attention to the strong Middle Eastern community around the sprawling University of South Florida campus just down Fowler Avenue from his space at 11301 N 56th St. So he worked to create a buzz about the social networks about the place weeks before it opens.

â€œIt was very scary, in the middle of the pandemicâ€¦ are you going to strike? Are you going to miss it? “He said.” But you have to take a chance. “

Inside the store is a lively mix of tall glass jars filled with colorful spices – turmeric, hot curry. There is a range of snacks from peanuts and chili-lemon to watermelon and pumpkin seeds. Behind the glass is a variety of sweets, including Turkish delicacies in long fat rolls, candy cut in the style of sushi and sold by weight.

Customers fill bags from tins of Halal gummy candies made without pork products. There are pickles called fakoos, sweet chickpeas, candies shaped like tiny slices of pizza. There’s chocolate from Jordan, nougat from Syria, roasted California nuts in Plant City. Kader is actively moving around the store, chatting with customers in English, Arabic, and a mixture of the two.

â€œWe thought it would slowly increase,â€ he said. “But that was crazy.”

“Gorgeous,” said customer Ahmad al Hamed as he went shopping with his father one recent afternoon. Originally from Jerusalem, he found the store by word of mouth and keeps coming back for chocolates and nuts. How many times?

Jessica Purvis was drawn to the great Roasted! sign outside. â€œIt’s so cute,â€ she said. She opened her bakery box to show off her selections: â€œThis is a nut baklava, a pistachio baklava and a hazelnut baklava,â€ she said. “I hope it’s ok.” Her grandfather loved sticky phyllo pastries, she said.

“We have people from the Middle East coming in and saying, ‘It reminds me of the house, the colors, the smells and the tastes,” “he said. He thought it would be his entire clientele, but about half of the clients were strangers and intrigued.

â€œIt’s crazy about our demographics,â€ he said. “But it’s great.”

Born in Pensacola to a Palestinian family, Kader was a young businessman who mowed lawns to earn money. He worked in a family-owned corner store after high school and also in his father’s counter business. He saved enough to buy this convenience store and then sold it to start his own business.

A Middle Eastern grocery store, he thought, but not the old-fashioned kind with narrow aisles and crowded shelves.

But the approximately 4,000 square foot long space available in a Temple Terrace plaza owned by his uncle – Kader gets a little “nephew’s discount” on the rent – didn’t seem big enough for a deal. So he regrouped, enlarging the nut section and focusing on the candy.

Since then, he has hired four USF students to work part-time.

During his travels he has seen stores like this in Jordan and Dubai, but more traditional in appearance. For his, he wanted the tastes to be traditional “but with a modern American twist,” he said.

He is married to Deanna, a teacher, and their son Mikal, 3 and a half, loves picking up candy and chocolate, making Kader “the coolest dad of all time in his eyes,” he said. he declares.

Recently when a woman called from Alaska to place an order, he couldn’t believe it – how did she find the place? She said she heard about it from a friend who lives here.

â€œThat someone eats this in Alaska makes me happy,â€ he said.

“I’m starving so I can show my creative side:” Meet Flint’s Artschool Dropout