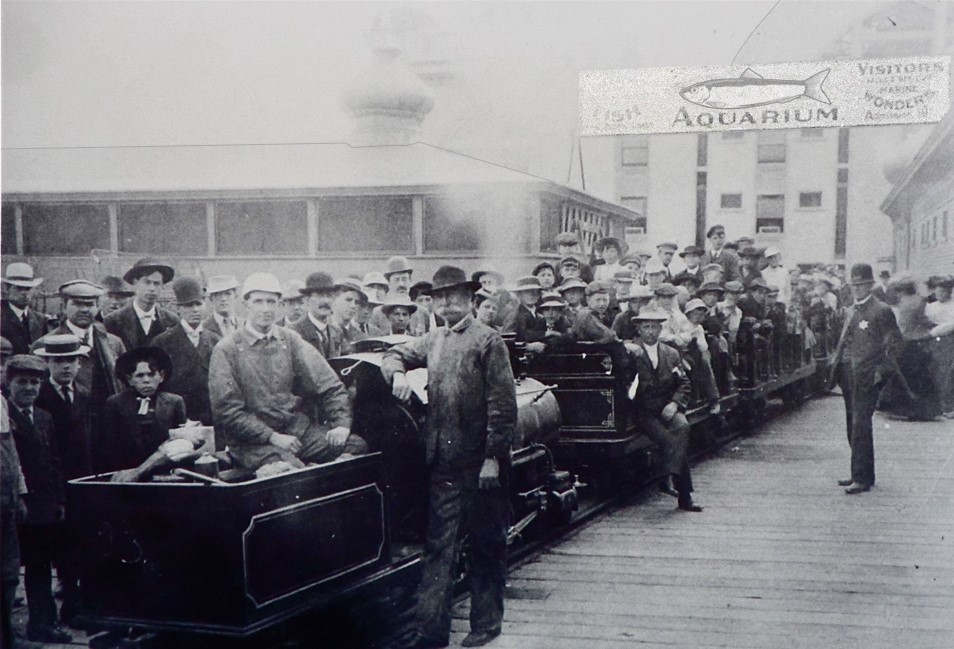 A grant from the David & Lucile Packard Foundation led to the 1984 opening of the Monterey Bay Aquarium in Monterey’s historic Cannery Row. This world-class institution is the pride of the Central Coast, finally interpreting the bay’s unique marine environment. This bay contains the Grand Canyon of the Deep, one of the few opportunities to study deep-sea marine life in a location close to shore.

When the Santa Cruz Lighthouse was built in 1869, a private collection was created by the first lighthouse keeper Adna Hecox, more seriously expanded and documented by her daughter Laura Hecox, who became the second lighthouse keeper. The collection included shells, seaweed, fossils, and the crafts of California Natives, South Sea Islanders, and Eskimos. Laura was friends with naturalist Dr. CL Anderson, a mentor who helped her identify various marine artifacts in her collection.

Vue de l’Eau Trolley Park opened in 1891 at the foot of what is now Woodrow Avenue. It was just under a mile from the lighthouse, and in 1892 John A. Moore built his “Free Cliff Museum” west of Bethany Creek on West Cliff Drive. John Moore and Laura Hecox became friends, helping to expand their collections. Moore focused his natural history on local marine and forest plants, animals, birds, and fish. John lived upstairs with his wife and daughters Jennie and Loie. They sold souvenir books, seashells, pressed sea foam (seaweed), postcards and picnic supplies. In 1903 he added a conservatory wing to the museum to better display his living plant specimens. When the Norris & Rowe Circus went out of business in 1910, Moore adopted a monkey, which was an excellent companion for his talking parrot and a big draw for his museum. Moore then moved the museum upstairs, while the grocery store occupied the ground floor.

Meanwhile, around 1889, a 6½-foot-tall muscular giant settled in Santa Cruz named Alphonse Forrer. The globe-trotting Englishman was darkly tanned from his many adventures, with his gray hair at the age of 50. His Natural History Museum on Pacific Avenue displayed a professional flair, as a one-time collector for the Smithsonian Institute. He exhibited exhibits of taxidermy of birds, fish, shells, crustaceans and marine invertebrates. There were also fossils, whale bones, exotic specimens from his travels, tanks of living creatures including some brought in by local fishermen. It also had shipwreck artifacts.

Some were shocked to learn that Forrer did not believe in God, but instead placed his faith in democracy. EMC Forbes was an eccentric English woman who believed in God, but expressed admiration for Forrer, as she felt it took more faith to believe in politicians. Forbes became Forrer’s good friend, so Forrer and his wife moved to the predominantly Transcendentalist community of Seabright where Forbes lived. Forrer brought his natural history collection with him in the early 1890s, to help promote this special resort community. Seabright Hall was a popular venue for educational “Chautauqua” lectures, and Forrer made several appearances for sea life lectures, while his wife was invited for her zither solos.

Forrer’s East Cliff Museum attracted much attention in June 1897, when it displayed a 5-foot-long octopus taken from the beach, covered in 500 suction cups. That fall, his museum moved to the YMCA building in downtown Pacific Avenue, as “Forrer’s Museum of Marine Wonders.” It included a gift shop of natural specimens, Swiss pottery and bric-a-brac. Two years later, Forrer died of kidney failure and was buried in San Mateo.

When Fred Swanton built the Boardwalk Casino in 1904, he added a small “Aquarium” exhibit, using memorabilia from the recently demolished “Museum Restaurant”. Admission was a penny. Swanton soon discovered that the public was most drawn to live sea creatures and mountain trout, particularly an appeal to sport fishers. So in 1905 Swanton built a new aquarium with much more space for live exhibits and contracted the commercial fishing fleet for live fish or unusual specimens. Salt water brought in via the pleasure jetty for warm salt water diving was also used cold for marine life. When the 1906 fire burned down the Casino, Swanton rebuilt better than before in 1907, with a new Aquarium. He eventually turned over the operation of the aquarium to the United States Bureau of Fisheries, which maintained it until the boardwalk was reorganized as the Seaside Co. in 1915, and abandoned the aquarium.

The municipal pier opened in 1914, intended to be a commercial wharf for fishing, shipping and steamships. But in 1915 the Pacific Mail Steamship Co. went out of business and the Pacific Coast Steamship Co. became the Pacific Steamship Co. in an amalgamation (which lasted until 1936), while Southern Pacific had no little need for his rail-to-steamship. connection (removal of the quay rails in 1931). Yet the Italian fishing community, while maintaining a viable fishing fleet, had expanded the use of the docks with sport fishing trips and speedboat excursions. Fred Swanton believed that an appeal to tourism could boost the docks’ economy, and in 1923 proposed to redesign the mouth of the dock with a crescent-shaped colonnaded entrance under a tall Spanish-style tower. And to the west of that gate was to be a two-story aquarium in a similar style, roughly the size of the Boardwalk Casino.

Swanton became mayor in 1927 and declared October 17, 1928 to be Santa Cruz’s birthday, as it was the day Governor Gaspar de Portola gave the area its present name in 1769. People were expected to dress like the first Santa Cruzans, in Spanish, pioneer or native styles. People rummaged through their attics and filled store windows with displays of artifacts from local history. One exhibit was from Humphrey Pilkington’s large collection of Native American artifacts, collected through his long friendships with Native tribes. People who didn’t know that Santa Cruz had a history began calling for a museum to house these artifacts permanently. When Pilkington died in 1929, he bequeathed his collection to the city of Santa Cruz, but only if it had a museum. Otherwise, his collection would go to UC Berkeley.

Jed Scott was another collector of Aboriginal artifacts and joined Swanton in finding a museum site. Begging for a small room in the building behind the Seabright Carnegie Library, they were amazed when the Seabright Craft Society gave them their building for a city museum. The Pilkington and Jed Scott collections of Aboriginal artifacts were joined by the Hecox natural history collection, which languished in high school. But with materials so tightly packed into the new showrooms, some important elements were held back, until the collection could be in a fireproof structure.

In 1938, a group led by Commissioner of Public Works Alvin Weymouth, established an aquarium in the building at the end of the wharf. Anglers have stocked its exhibits with live specimens throughout the year, including rare catches of deep-sea fish or stray fish from southern waters or the Hawaiian Islands. Fishmonger Malio Stagnero bought them their first show tank. Through experimentation, the aquarium developed new ways to help species survive in captivity, which caught the attention of San Francisco’s Steinhart Aquarium and author-educator David Starr Jordan.

The aquarium has become a tourist attraction, popular with schools in Central California. Soon, an annex was installed near the “Look’s Den” curio shop. Huge crowds and cramped exhibition space prompted fresh calls for the Swanton Aquarium proposal. Voters therefore approved Southern Pacific’s offer to donate the proposed aquarium site, and plans were drawn up in April for this joint $50,000 City-WPA project.

Then Weymouth quit the aquarium committee, saying the town was on the verge of betraying voters’ wishes, intending to use the aquarium site for a road from Beach Street to West Cliff Drive in place. Despite support from Mayor C. B. Hinkle’s aquarium and the Young Chamber of Commerce, the council voted for a short connector street instead of an aquarium.

World War II intervened, delaying the construction of the connecting street until 1954, when the Arts & Crafts building was demolished. The museum was moved to the rear of the Seabright Carnegie Library and the library left in 1959. It was hoped to place the Scholl Marr Castle Aquarium across the street, but the owner demolished the castle in 1967. In 1972 the City Museum split in two, with cultural history housed in the Octagon Museum and natural history in the former Seabright Library.

Nine years after the founding of UC Santa Cruz, 40 acres of coastal bluff west of Natural Bridges State Beach, was donated in 1974 by Donald and Marion Younger to serve marine science. With funding from Long’s Drug Store founder Joseph M. Long, the Long Marine Lab was opened in 1978. Then, on March 11, 2000, the Seymour Marine Discovery Center became the lab’s central museum, making it the California’s only operating research lab open to the public daily.

The Monterey Bay National Marine Sanctuary was designated on September 18, 1992, and the Sanctuary Exploration Visitor Center was later assigned to Santa Cruz. It opened on July 23, 2012, just west of the site Swanton had proposed for the Santa Cruz Aquarium.